Jim Thompson – A Hell of a Woman 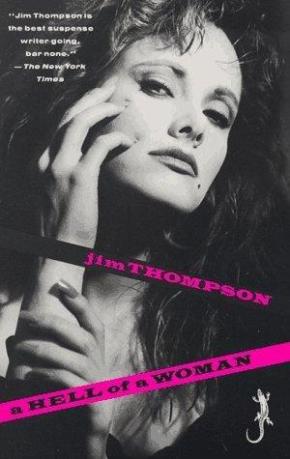 “I told her the world was full of nice people. I’d have hated to try to prove it to her, but I said it, anyway.”

Jim Thompson is not to be found in any bestseller list but he’s high on the list of all time noir fiction writers. His popularity has sustained because of this and, in my case, by word-of-mouth. My colleague and friend Joe Knobbs was the mouth that first mentioned Thompson while I was heavily into my blinkered stage of only reading science fiction, fantasy and horror. Crime was never a genre that appealed to me but times have changed and I’m finding myself trying to catch up and having an absolute blast doing it.

I was drawn to the title straight away. “A Hell of a Woman” leads the mind in a lot of different ways. I wanted to know who this woman was. To the few people I have talked to about this book, no one seems to know who she is. To me, it’s all the women that Frank encounters. All of them to him are hell.

Frank “Dolly” Dillion is a door-to- door salesman, whose wares are cheap in every way, and he’s down on his luck. Skimming money off from his job and living with his wife he describes as the same as all the other he’s been with in their dump of an apartment. Frank meets a girl named Mona who is practically sent to the street corner by her aunt or in Franks’ case for a set of plates. When he finds out the tight fisted old crow has over one hundred thousand dollars stored away he sees his way out.

This is an excellent book. It’s full of witty and interesting dialogue, in the style of the greats Thompson is labelled with. The reason why I singled this one out and Thompson in general is because his main protagonists have a chilling and sadistic edge. None more so than Dolly, who loses control on a few occasions with horrifying results. As the book is told from a first person perspective, his occasional rants with himself make him such an interesting character that I found it hard to pull myself away from a mind that slowly unravels. Towards the end, Frank’s narration splits into two, one in italics and one in standard text, each having an alternate line. You have to read one style to the end of the chapter and then go back and read through again to gain a different perspective. One is an insane ramble and the other is what really happened and I love that with all the disturbing events of the book, it could be either. Even though the women in this book are show in a negative light it gets away with it due to Dolly’s pure insanity, which jars his view towards them and proves that he is in fact his own worst enemy.

Savage Night, The Killer Inside Me and Pop 1280 are other titles I’ve read by Thompson, the latter I’ll review at a later date. They follow similar themes but they are all equally fantastic. Formulaic perhaps, but at least they’re far cry from Lee Child’s novels by numbers.

Tagged as A Hell of a Woman, Jim Thompson, Reading