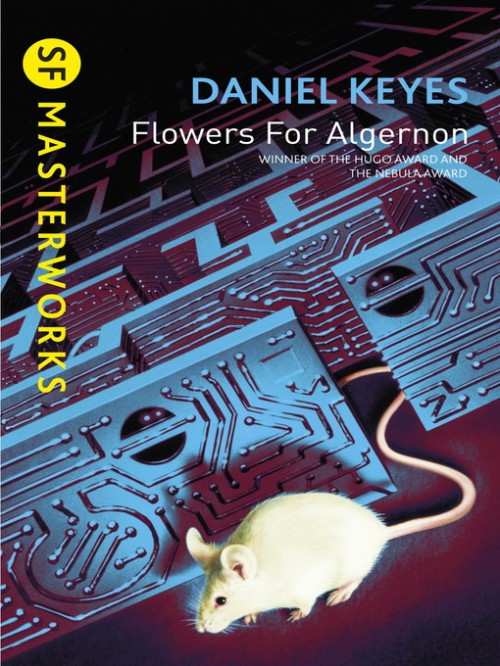 “I don’t know what’s worse: to not know what you are and be happy, or to become what you’ve always wanted to be, and feel alone.”

This book was bought for me by a friend and colleague of mine, as an important addition to my SF Masterworks series, but I wasn’t too excited to read it. So, it remained at the bottom of my to-read pile. It wasn’t until I found out this book is really just a series of diary entries from Charlie Gordon, a mentally retarded thirty-two-year-old man, that I dropped everything.

The novel starts with Charlie working as a janitor and delivery boy in a New York bakery. He often is the butt of the other workers jokes, who rejoice when he pulls a “Charlie Gordon”, but his eagerness to please overshadows the bullying and Charlie thinks they’re his friends.

“Its easy to make frends if you let pepul laff at you.”

Even though it seems impossible for him to retain any information, he is still the hardest worker in his class for retarded adults and as a result Charlie is selected by a team of scientists to undergo an experimental surgery designed to boost his intelligence. He’s asked to keep a diary to explain what is happening to him and to record his feelings, so the reader is treated to the inner workings of the trial by Charlie’s progress reports. These reports at first are as legible as you would expect from a man whose I.Q is 68 but as the effects of the operation start to show and his “progris riports” start to improve Charlie’s outlook also changes towards the people he once called friends. He realises they weren’t laughing with him; they were laughing at him.

“How strange it is that people of honest feelings and sensibility, who would not take advantage of a man born without arms or legs or eyes—how such people think nothing of abusing a man with low intelligence.”

The irony is that Charlie is just as alone as he ever was. He was mocked for being an idiot but now he is hated for his intelligence. This takes the progress reports to bitter heights.

Algernon, a little white mouse, is the first successful subject for the operation and it makes him three times more intelligent, enabling him to solve complex puzzles. Charlie struggles to keep up with the mouse in the puzzle maze challenges, but as the effect starts to take hold, he becomes increasingly faster than little Algernon. The effects of the procedure on Algernon are, unfortunately, short-lived and Charlie is left to wonder how long it will take for his new found genius to slip away.

This book isn’t a fun read at all. It’s tragic from beginning to end but the reason why it’s one of my favourites is it feels important, it feels like your reading something incredible. The choice to make this book someone’s diary entries is fascinating and connected me with Charlie more than if it was just first person. I cannot recommend this book enough, not just to fans of SF, but to anyone. Get the tissues at the ready.

I would love to read more of this style, or books similar, so if you have any pop a comment in below or give me a tweet.

Flowers for Algernon is published by Gollancz as a SF Masterwork